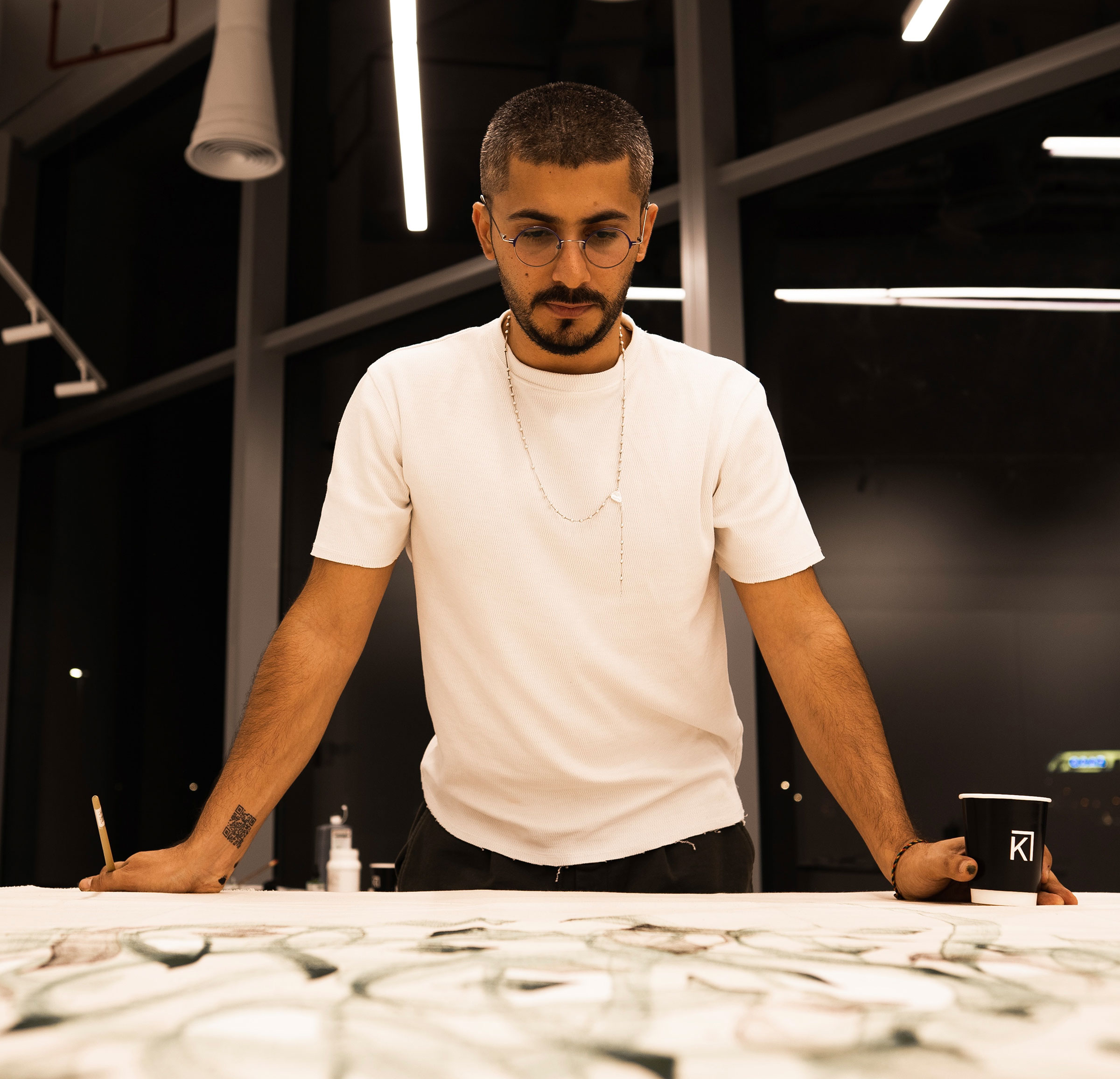 "I remember I was allowed one song from the album before the release and that was an incredible motivation as an artist and as a fan."

The "epic collaborative project" put together by creative agency Leo Burnett utilized more than 10 artists—a brilliant approach according to Ghaleb.

He was assigned the mammoth task to work on the title—which is the first visual anyone will notice on an album cover—aligned with their new technique and concept for the said album. Alongside a poster done by hand with the classic thuluth script, a script Ghaleb needed to learn within a week. "A sane person would never turn down such an opportunity," he recalls.

Ghaleb Hawila, based between Dubai and Beirut says his work comes from a deep understanding and respect for the cultural roots, and classic work, with a fresh eye and openness to meet the contemporary. To put it into simple words, he says, "I'm too halal for haram people and too haram for halal people."

His journey started with an exploration into the roots of Arabic identity in design. A personal and cultural curiosity arose and fueled the path from then on. That journey kept evolving with time as Ghaleb understood more and learned about the origin and the why's behind each language and script. The journey took different quests and paths over time, however, one thing remained constant: Using language to express his individual and culture's state and observations.

Whether calligraphy is a dying art or not is subject to debate. Ghaleb does not believe so. We might be drifting with technologies and usage of Arabic Calligraphy compared to 50 years ago, however, Ghaleb regards the idea that we can see how much design in the region is influenced and is basing their advancement on [calligraphy]. "You can take it on a more personal aspect like jewelry or tattoos, which you will find huge demand and appreciation from the market," he says. He adds that the contemporary and street art scene is reaching worldwide appreciation and recognition. Not to mention calligraphy's application on album covers and TV series. "Also, a lot of non-professionals practice Arabic calligraphy as a hobby, weekly classes are offered everywhere from Indonesia to Morocco."

Ghaleb has this to say to aspiring calligraphy artists: Be true to your roots and yourself. Understand the history of one's land and language. From a personal experience, he implores openness to engage other calligraphers and artists from other cultures. "It is one of the most inspiring and enriching experiences. Believe and trust your instincts."

It is one of the most inspiring and enriching experiences. Believe and trust your instincts.

Ghaleb concludes with sharing his perspective in the uniqueness of his approach and mentality. "I'm driven not to get influenced by the current Arabic calligraphy movement." Drawing inspiration from different genres in music and allowing his personal experience inspire his work is essential. "It's a big challenge to keep your calligraphy as classic as possible and be different and have your fingerprint as an artist. But I can say that I'm on my way there and things are getting clearer with time." After all, every human or artist has distinctive life experiences that lead to unique artistic interpretations.

"The artist needs to be serious about what they're doing. This means not taking shortcuts, but sweating, bleeding and crying with passion"
BACKSTAGE