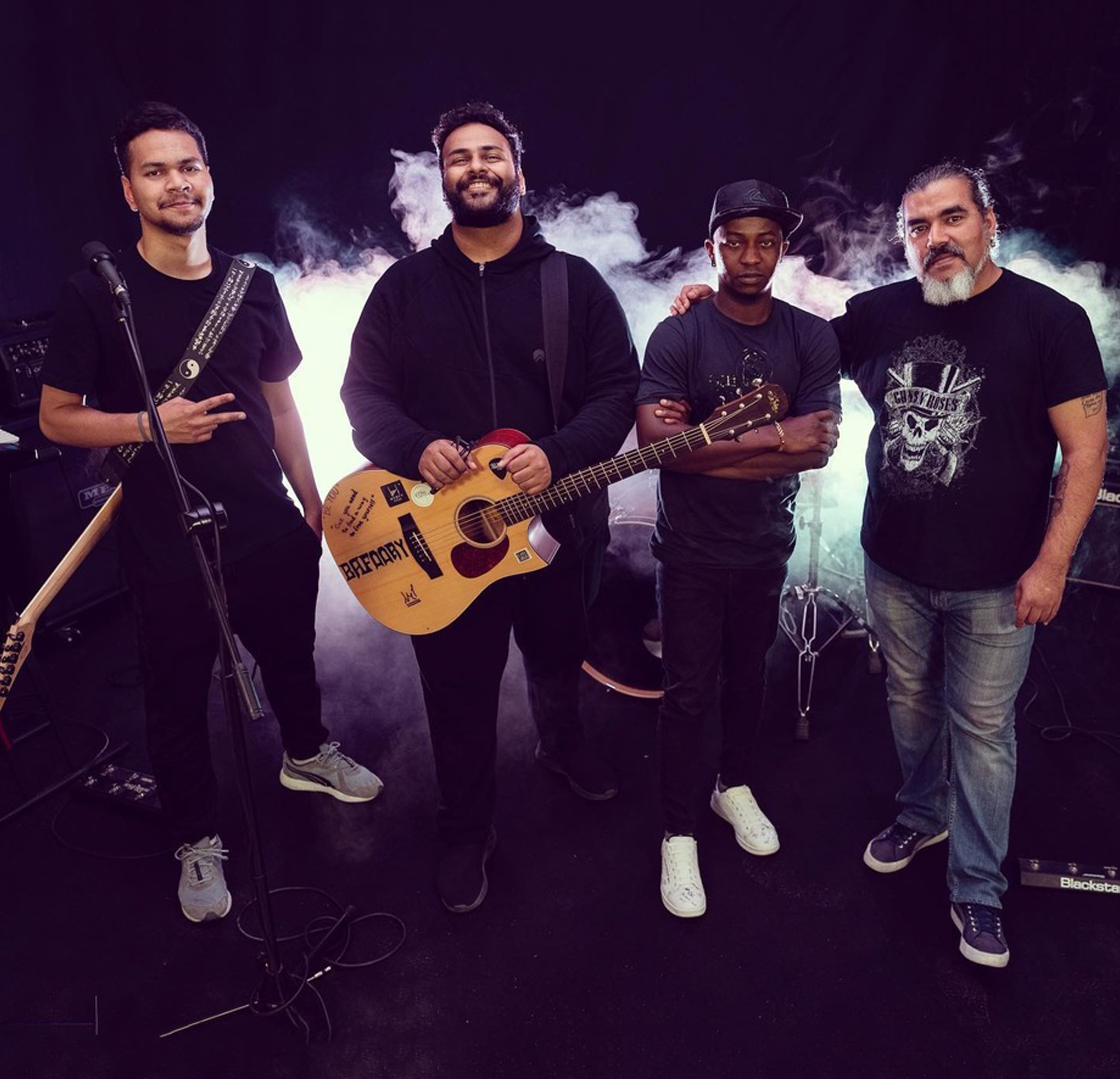 Emirati rock band  Bafoory, got inspired early on by bands from the ’80s and ’90s and early 2000s harboring a mixture of the golden days of pure alternative, hard rock producing hits like 'Nicotine' and 'Time Machine.' The band still has a lot to say and offer to the rock music community and their future looks bright ahead. musivv connected with the 4-piece band to know more about them and their latest release.‍

First of all congratulations on your latest release. It's good to see rock alive in the region. Secondly, how are you guys? Great to see music is alive and well even amid the pandemic.‍

Eric: By the grace of the Almighty we are all fine and rocking... Well, it’s been difficult during the pandemic with all the restrictions in traveling through the Emirates, but our will and our togetherness in music kept us going, with doing PCR’s to the blood test also, we finally managed to pull off the album.‍

Tell us the process of coming up with the album Echoes In Eternity. When was the inception? Take us through the challenges you faced and how did you guys overcome them? What was the recording process like?

‍Khalid: The recording process started in 2019 and it was scheduled to be released in 2020 but due to the Covid-19 pandemic it was delayed like everything else in the world. It was tough finding the time to go to the studio to record due to the lockdown and doing tests to go over the border but in the end, we overcame that and we figured it out. And of course, it affected the recording process as we had to delay the recording of some parts of some songs but in the end we made it and it was fun making this album as we went to a place we’ve never been before in terms of the writing and the genre.‍

Who came up with the album title? What was the name choice process like? We can interpret the title as "your sound/message echoes in eternity," or "there are echoes in eternity and we captured them in this record." Which one is closer to your definition? ‍

Mohammed: I actually came up with the title and I have a bunch of interesting titles writing in my notebook and it kinda fits the atmosphere of some songs. Originally it was going to be called Winds of Fate which is the title track of our first single.‍

Who is Kennedy Amadi and what sort of influence has he had with Bafoory that you have dedicated the song (or the entire album) to his loving memory. ‍

Mohammed: Kennedy was a friend who supported us all the way from the beginning and everybody in the music scene knows him and knows his support and kindness. He was just the best and this track was dedicated to his memory.‍

We see that you guys keep true to yourselves and your sound, what keeps you doing it? ‍

Eric: Frankly speaking, we all grew up listening to the sounds of Metallica, Judas Priest, Anthrax, and the like and their sound just blew us off, even during the early 90’s they managed to create such a great sound through their guitars, the bass drum and the snare, which eventually we adhered into our music.‍

‍How is it like working with Amy Gillen? Any incident you can share that stood out? ‍

Mohammed: Working with Amy was such a delight, she is very talented and professional and she absolutely blew our minds recording on that song.‍

'The Solace Within Me' is very reminiscent of November Rain. Is GnR a huge influence? ‍

Mohammed: Actually, when I wrote that acoustic line, I wasn’t influenced by any particular band or song it just came out of me coincidentally. But I’m glad that some people feel that it reminds them of a certain song or band. It’s open for interpretation.‍

They say the album format is for the era of physical distribution in music and that the digital streaming format has given rise to releasing singles. What are your thoughts on this? ‍

Abduallah: Releasing a physical album is a much higher risk than releasing a digital album on music streaming platforms such as Apple Music and Spotify. Physical copies won’t tell new audiences our genre of music since all that's provided on the shelf is our artwork. On the other hand, music platforms can suggest our music to audiences who listen to similar artists.

On the topic of releasing singles: Digital platforms have made releasing entire albums much safer. The reason behind it is that we first release a single, in our case winds of fate. Since our single was well received, we give the whole album a green light and proceed with recording and releasing the entire record. ‍

What are your favourite tracks in the album?‍

Abduallah: It’s a tie between 'Winds of Fate' and

Mohammed: All the songs are my favorite‍

Eric: 'The Solace Within Me,' 'Darkness Into Light,'

HOMEGROWN is musivv’s segment dedicated to featuring Emirati artists. Features under this segment are eligible for a nomination under this category on The musivv Awards (TMAs) annual recognition.

Quizy Quiz talks about life, music, and inspirations in his single 'YOU'
HOMEGROWN
Read
Full Story

His music reflects the embodiment of the UAE, where the old values meet the new and progressive:
HOMEGROWN
Read
Full Story

A celebration of diversity through music, art, and dance.
HOMEGROWN
Read
Full Story